Result has been achieved in October 2021 : month 48 of the project.

Short introduction
Simulation is a key piece in the puzzle of engineering high performance systems. Furthermore, computationally fast simulation enables modern computer optimisation approaches that have traditionally been inaccessible. Simulation of the thermal aspects of the car cabin can be broken into two main parts:

With the introduction of this integrated simulator, we provide a computationally fast, coupled cabin and HVAC simulation that supports the development of a closed loop control system. This simulator outperforms existing systems both in terms of computation speed (a few hundred microseconds per cycle compared with about 1 second per cycle for 0D simulation) and resolution (12 physical locations with three variables each compared to one or two cabin-average variables for 0D simulation).

For example, the following graph shows a typical simulation of warming up with air temperatures for the driver’s head, torso, and foot (t_drvr1, t_drvr2, and t_drvr3, respectively). Windshield temperature (ws) is also shown. 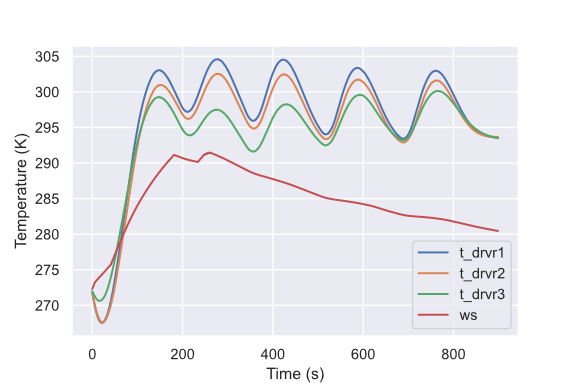 Graph: simulation of warming up with air temperatures for the driver’s head, torso, and foot